The Richard Hooker Society was scheduled to present three panels at the Sixteenth Century Society Conference in Baltimore this October. Given the state of the pandemic, the cancellation of this event is understandable. The panel will now be held online October 30, 2020. 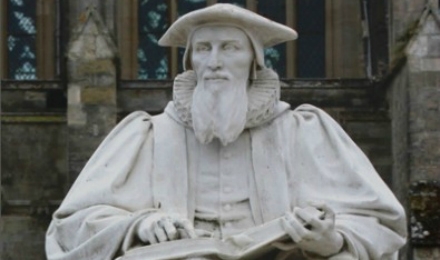 The papers on one of the panels have been slotted to be part of a forthcoming book, eds., Kindred-Barnes & Graves, Richard Hooker and the Christian Virtues (Brill, 2021).

You are invited to a Zoom panel on October 30, 2020 at 2:30 AST. The details for the panel are pasted below. We hope you can tune in and be part of what promises to be a worthwhile discussion.

If you want to attend, you may contact Scott Kindred-Barnes via e-mail.

Panel Abstract: Thanks to the ground-breaking studies of Torrance Kirby, the past twenty-five years of Hooker scholarship has had to revise the traditional interpretation of Hooker as a proponent of a via media between Roman Catholicism on the one hand and the Genevan Reformation on the other. Thus, that Hooker stood in continuity with Reformed Theological Orthodoxy has been more firmly supported in recent years. Hooker’s Of the Lawes of Ecclesiasticall Politie (1593, 1597) was born out of a context of ecclesiastical debate when his opponents, the leading critics of the Elizabethan religious settlement, sought further reform of the Church in England. In defending the Church of England, Hooker read and quoted widely from the Church Fathers and Medieval theologians. Thus, even if scholars are now more inclined to show Hooker’s affinity with Magisterial orthodoxy, several important questions still remain regarding his understanding of Medieval Theology. Thus, the papers on this panel will aim to explain how Hooker’s understanding and use of the Christian virtues—concepts largely associated with Medieval Christianity—fit into his defense of the settlement, his critique of his opponents. Moreover, did Hooker’s understanding of the Christian Virtues shape his allegiance to and/or his departure from the magisterial reformers? The three presenters on this panel include: Professor W. David Neelands, Trinity College, Toronto; Dr. Scott Kindred-Barnes, Carey Theological College, Vancouver and Professor Torrance Kirby, McGill University.

Hooker scholars have long acknowledged the influence of Dr. John Rainolds on Richard Hooker. As both his tutor and life-long friend, Rainolds was situated as well as anyone to have a significant influence over his promising student. While many scholars have acknowledged the influence that Rainolds had on Hooker (Sisson, the editors of the FLE, Sheolk, and Collinson), few have explored the extent of this influence on Hooker’s theology.  Thus, this paper will aim to ask an important question: Does Hooker’s understanding and use of the Christian virtues reflect the influence of John Rainolds? My paper will attempt to answer this question by comparing and contrasting relevant passages in Hooker’s Laws, and Sermons with several important works by Rainolds; including, John Rainolds’s Oxford Lectures on Aristotle’s Rhetoric, ed. Lawerance D. Green, A Letter by Dr. Rainolds to his Friend, concerning his advice for the study of Divinity (1577), The Summe of a Conference between John Rainolds and John Hart (1584), and A Sermon Upon the Eighteenth Psalm (1586).

Humanists in the sixteenth century promoted the view that human beings are capable of virtue, as their classical models had suggested.  Some, like Marcilio Ficino, advocated an atheistic account of human culture.  Hooker, departed from his scholastic sources and used the same list of transcendentals as Ficino had pioneered. For his account of virtue, he faced criticism from Puritans, who insisted on the helplessness of human beings to do good works of virtue on their own.  Hooker agreed that grace was required, but insisted that grace did not destroy human virtues but completed them. Thus, humanism provided wisdom, and scholasticism remedied the deficiencies of humanism.

Justifying Faith and Faith as a Virtue in the theology of Richard Hooker
Torrance Kirby, McGill University

Like virtually all of his contemporaries among the magisterial reformers, both in England and on the continent, Hooker’s moral theology is inseparable from his theology of grace.  That such is the case is made clear in the argument of chapter 11 of the first book of the Lawes. “Had Adam continued in his original state” then the Natural Law would have been sufficient for the attainment of human ethical fulfillment.  Yet, as Hooker very plainly states, “the light of nature is never able to finde out any way of obtaining the reward of blisse, but by performing exactly the duties and works of righteousnes. From salvation therefore and life all flesh being excluded this way, behold how the wisedome of God hath revealed a way mysticall and supernaturall . . . prepared before all worldes (Lawes I.11.5,6).” Grace—a “way supernatural”—is for Hooker the source of the theological virtues, without which there can be no attainment to moral fulfilment—beatitude or eudaimonia. If it is the case that human value systems are, to a large extent, contextually determined, then with Hooker, as indeed with all of the magisterial reformers of the sixteenth century, the regulating context of a theology of the virtues is shaped ineluctably by the foundational parameters established by the doctrine of grace.  As Hooker observes in his Sermon on the Nature of Pride “the want of exact distinguishing between these two waies [viz. of nature and grace] and observing what they have common what peculiar hath bene the cause of the greatest part of that confusion whereof Christianity at this daie laboureth (Pride, 5:313.19-23).” The chief concern of the Reformation is the formulation of the principles of soteriology, and it is entirely within the frame of this task that discussion of the virtues is undertaken by the reformers.  While Hooker embraces “virtue ethics” he nonetheless does so in a manner closely comparable to that achieved by Melanchthon and Vermigli, for example, and altogether consistent with Art. XII of the Articles of Religion: “Good works are the fruits of Faith and follow after Justification, cannot put away our sins, and endure the severity of God’s Judgement: yet are they pleasing and acceptable to God in Christ, and do spring necessarily of a true and lively Faith.”