Protestant nuns and mixed-confessional convents are an unexpected anomaly in early modern Germany. According to sixteenth-century evangelical reformers’ theological positions outlined in their publications and reform-minded rulers’ institutional efforts, monastic life in Protestant regions should have ended by the mid-sixteenth century. Instead, many convent congregations exhibiting elements of traditional and evangelical practices in Protestant regions survived into the seventeenth century and beyond. How did these convents survive? What is a Protestant nun? How many convent congregations came to house nuns with diverse belief systems and devotional practices, and how did they live and worship together? These questions lead to surprising answers.

Stripping the Veil explores the daily existence, ritual practices, and individual actions of nuns in surviving convents over time against the backdrop of changing political and confessional circumstances in Protestant regions. It also demonstrates how incremental shifts in practice and belief led to the emergence of a complex, often locally constructed, devotional life. This continued presence of nuns and the survival of convents in Protestant cities and territories of the German-speaking parts of the Holy Roman Empire is evidence of a more complex lived experience of religious reform, devotional practice, and confessional accommodation than traditional histories of early modern Christianity would indicate. The internal differences and the emerging confessional hybridity, blending, and fluidity also serve as a caution about designating a nun or groups of nuns as Lutheran, Catholic, or Reformed, or even more broadly as Protestant or Catholic during the sixteenth century. 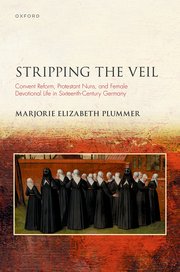