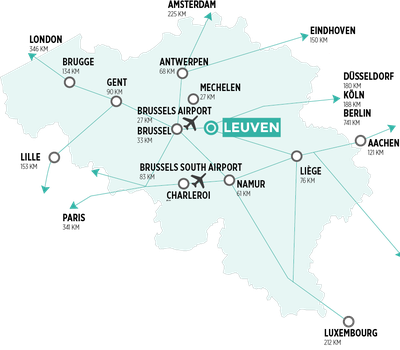 Leuven is located in the centre of Belgium. Whether you land at Brussels Airport, arrive by train in Brussels-Midi or enter Belgium from any direction by car, you are always within reach of Leuven.

Brussels Airport (28 km from Leuven)
Leuven is approximately a 15 minutes train ride from the Belgian National Airport of Zaventem. The airport has its own train station (Brussels National Airport), with direct trains to Leuven. The station is underneath the airport and is accessed via lifts and escalators in the arrivals hall. Several car hire companies also operate from Brussels Airport.

From Leuven, it takes half an hour to reach Brussels South (Bruxelles Midi, Brussel Zuid) railway station. From there, you can catch high-speed rail connections to Paris, London, Amsterdam, and many other European destinations. The Leuven railway station is directly connected to the city centre via the Bondgenotenlaan (Allies Avenue), one of Leuven’s main streets. The walk from the station to the city centre is approximately 10 minutes. For more information on the Belgian railways: www.belgianrail.be.

For more information on the European train connections: https://www.b-europe.com/EN

Most busses in Leuven leave from the railway station, or the Rector De Somerplein, closer to the city centre. You can buy your ticket in advance, at the ‘De Lijn office/Lijnwinkel’ at the railway station, and at certain newsagents. You can also buy a tickets by asking the driver, but this is a little bit more expensive (2€/ticket). If you plan on taking the bus a couple of times, it might be more advantegous to buy a pre-paid ticket for 10 trips, which will cost you 14€.

The routes of the buslines and time schedules can be found on the website of De Lijn.

Leuven is located at the junction of two motorways: the E40 and the E314. The ‘P’ signposts will guide you to the different car parks. Be careful when driving into the city, as there are many one-way streets and the historical centre of Leuven is traffic-free. We would advise you to park your car in one of the more advantegous ring road car parks.

Car parkings in the city center of Leuven can be found here.